Several years ago, this intriguing oil painting came into my store. Attached to it was a very interesting story and one that definitely excited my passion for military related treasures. In the world of antiquities and appraisal, “Provenance” is a key component to the value of an item. Provenance is defined as”a record of ownership of a work of art or an antique, used as a guide to authenticity or quality” The story provided by the seller did not, unfortunately, meet the standards for provenance and was indeed hearsay. Exciting nonetheless! 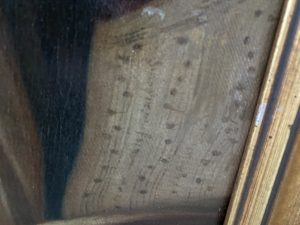 The story of the painting was as follows;  Nearing the end of WWII, a young Canadian soldier had been rummaging through the bombed out ruins of a government building in Berlin and through the rubble there was what appeared to be a painting or at least a piece of a very old painting. He cleared the debris and found a very large, very damaged oil painting scattered in several pieces. He brushed the dust off one section was found a pair of haunting eyes staring back at him. He carefully cut out this this seemingly undamaged portion, of a man reading music, that made up its own story entirely.  He carefully rolled it up and stuck inside his ragged uniform shirt. He was flown back to Canada a few days later with his treasure carefully stowed inside his clothes.  As the man aged and neared the end of his life, he found a local buyer for unique painting for an undisclosed amount. That buyer, sold it to me.

I was enthralled at first glance and began to authenticate the story as best possible. Unfortunately the seller of the painting had no tangible proof to his story but through some deductive research, I was able to find some circumstantial evidence that lead me to believe it was indeed true.

The first deduction I must make is – Is this a reproduction meant to look “old”.  So begins the research process.

The painting is of exceptional quality, clearly painted by a very talented artist, yet there is no signature anywhere to be found. Leading me to believe the signature was on another piece of the painting.

The quality of the art as well as canvas and paint used are excellent. I have learned, as an appraiser, that since the British Museum opened its doors in 1753, talented painters have been selling copies of famous art.  This is a very common practice that continues to this day.  The replicas are produced many times over, therefore using expensive materials and costly labour would negate their profits. Therefore often the paints used are cheaper and less vibrant, the canvases are flimsy and do not stand the test of time, among other clues- but I can’t give away all my secrets!

The painting measures 18 x 18 inches and has been mounted in a modern, gilded frame. However the rough edges are visible and are clearly “sawn” with likely a knife, perhaps a well used, military issued bayonet?

The size of the man’s face is nearly life sized, lending itself to the theory of being part of a very large painting.

The canvas itself shows natural signs of age and is quite soiled, which would support the theory of it being left in a bombed building and smuggled in dirty clothing.

I used a UV black light to check the fluorescence on the varnish of the painting and there appeared to be a greenish glow, which would be consistent for an painting of the 18th century.

I have not done any testing on the paint or pigments to verify the age of the piece as the resources required for that would be unnecessary, unless there was a suspicion of very high values. I was able to deduce, in my professional opinion that the story provided to me was likely- true. 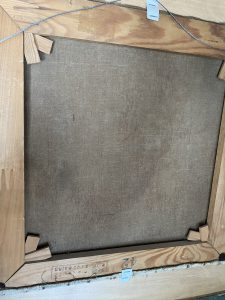 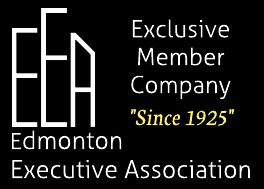